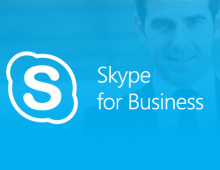 After successful trials and the beginnings of an even more successful roll-out, Skype for Business is firmly establishing itself as the go-to tool for instant commercial communications in an increasingly virtual world. Many of us have become used to contacting distant friends and family members via Skype on our home computers and tablets, but in recent months it has become more familiar to business users as well.

Many users have come to Skype for Business from Lync, and one of the first things they notice is the continued – and indeed improved – usage of single taps for various operations. Contacting those who really matter has become more streamlined now, and features like this make the user realise that instant messaging and initial contacts have become even more simplified.

Anyone who has used former versions of Skype will know that the utility has a powerful network of users, and with Skype for Business searching for people is as easy as it gets. Commercial uses for this application cover just about every type of communication, from multi-user business meetings in the manufacturing industry to conducting person-to-person interviews in the recruitment field.

Get ready for an update that really matters

Lync users can control the timing of the update, so if you are still using this system you will need to think about when you want to make the switch. Early indications are that Skype for Business is all you need and more besides, so it makes sense to think about changing at the earliest opportunity. For added convenience, updates will be included in Office monthly updates.

Many business people pride themselves on being ever adaptable and ever willing to change, but even they sometimes find it difficult to leave something behind, especially if it has served them well in the past. This is one of those occasions, however, when the user experience will be significantly improved, and it can still be enjoyed on the devices that people are currently using.

Perhaps the most apparent of all the improvements lies in the way other users can be found and contacted. Connecting with others needs to be a slick process in the modern business environment, so easier to use controls will turn out to be a major plus point. The system, which goes fully live in August 2015, is likely to prove to be a winner with all users, especially those who need fast, instant connection on a regular basis.